‘The personal is the political’. These words, that became the seminal message of the 1970s feminist movement, are at the heart of Audre Lorde’s assertion that ‘poetry is not a luxury’. The language, form and content of Lorde’s poems demonstrate that her poetry does not present an abstract, idealised view of the world but is the life blood of the political struggle to achieve freedom from white patriarchal oppression. Poetry as luxury suggests that the value and meaning of the poems themselves are secondary to the aesthetic form, which is solely designed to entertain and please. For Lorde, this is a fatal misinterpretation of the power of and the need for poetry. ‘Poetry is not only dream and vision; it is the skeleton architecture of our lives. It lays the foundations for a future of change, a bridge across our fears of what has never been before.’[1] The metaphors Lorde uses of a ‘skeleton architecture’, ‘foundations for a future’ and ‘a bridge’ in describing poetry brings it out of the ethereal world of ‘dream and vision’ and into a tangible, substantial reality. This emphasis on the importance of poetry in underpinning change and progress demonstrates that dismissing poetry as a luxury, crucially underestimates its power and vitality. Lorde’s emphatic, emotive voice, in both her poetry and her essays and speeches demands redefinition of difference and a new outlook for Black American women, and she emphasises repeatedly the importance of poetry in this process of change.

‘If we are looking for something which is new and something which is vital, we must look first into the chaos within ourselves. That will help us in the directions that we need to go–that’s why our poetry is so essential, is so vital.’[2]

So the personal becomes the political through poetry for Lorde and the essential value of poetry is that words can build bridges and provide voices to those who can not find words themselves to change their lives. For her ‘the question of social protest and art is inseparable’[3]; a view which Adrienne Rich, and in a slightly less explicit way, Allen Ginsberg share. Rich discusses the fundamental nature of art in a similar way to that of Lorde and her own work could never be described as superfluous luxury. Rich warns against art being ‘dismissed as entertainment’ and diminishing into ‘the “art object” of a thousand museum basements’, emphasising the organic nature of art and the absolute inaccuracy of poetry being described as a luxury. She echoes the thoughts of Lorde when she asserts that ‘this deeply instinctual yet self-conscious expressive language, this regenerative process, could help you save your life.’[4]

Allen Ginsberg, writing in the 1950s and ’60s, preceded the works of Rich and Lorde, and the ideals of the ‘Beat Generation’, of which he was a central figure, were influential in the burgeoning civil rights and women’s liberation movements. The term ‘counter-culture’ (coined by Theodore Roszak in the 1960s) described a shift in ideas that stemmed from a rejection of mainstream post-1945 American culture, which was seen as increasingly hypocritical and oppressive[5]. The development of this counter-culture, with its aspirations for spiritual liberation and a new respect for the organic world, ‘cherished the stance of the alienated’[6] and gave a voice to those who did not feel represented by the conservative politics and culture of mainstream America. This positioning of the work of Ginsberg and other writers of the Beat movement against established American society demonstrates that viewing their poetry and prose as ‘luxury’ is a gross misrepresentation of their aims. The organic, vital nature of Ginsberg’s aesthetic form brings to life the occluded narrative and spiritual vision of the ‘other’, in the sense of the American social outcast. Ginsberg’s epic work ‘Howl’[7] (1956) is a lengthy, three-part piece written using the stream of consciousness technique he favored. It enabled the words to flow in a torrential outpouring which freed the mind from literary convention and echoed the liberation of his perspective as it was recorded in words on the page, or spoken to an audience. He described his stream of consciousness style as ‘a kind of natural speech rhythm that comes when you are speaking slowly, interestedly, to a friend.’[8] This immediacy of style echoes Rich’s belief that poetry’s ‘regenerative process’ is to be found in the ‘deeply instinctual yet self-conscious expressive language’, and a poem such as ‘Howl’ could perhaps be interpreted as an exemplification of this idea. The language and form are free from convention and censorship, which highlights the political in the poetic. Ginsberg’s argument that this freedom was inhibited by America of the 1950s is emphasised by Ferlinghetti’s arrest after the public reading of ‘Howl’.

The freedom of Ginsberg’s expression mirrors the spiritual and psychological freedom he wishes to inspire people to reclaim and which he feels is suppressed by the ‘Moloch whose mind is pure machinery! Moloch whose blood is running money!’; a vision of contemporary America rooted in religious mythology, ‘Moloch’ being ‘one of the deities worshipped by the idolatrous Israelites’[9]. This psychological freedom (personal) is at odds with the workings of the state (political) and in this sense Ginsberg’s poetry is attacking the idea that poetry is a luxury, as it becomes a necessity in his idea of how freedom is achieved. The emphasis that Ginsberg places on psychological freedom rather than political freedom is apparent from the opening of the poem, with his reference to seeing ‘the best minds of my generation destroyed by madness, starving hysterical naked’ [my emphasis] (line 1). The influence of William Blake, of whom Ginsberg was an ardent admirer, is evocatively apparent in this poem. Lines such as ‘angelheaded hipsters burning for the ancient heavenly connection to the starry dynamo in the machinery of night’ (3-4) appeal to a transcendental freedom, and a complex, organic, spiritual truth of humanity (reminiscent of Blake’s ‘London’), the very essence of which is captured in the form of the poem; a subjective tidal-wave of Ginsberg’s reaction to the relationship of the individual to the state. The politics Ginsberg seems to represent are what Norman O. Brown labeled ‘‘metapolitics’ : the politics of Blake, that is, in which psychological or spiritual freedom is the only sure warrant for political freedom’[10]. Ginsberg’s aesthetic form is therefore not overtly political, but the intense lust for spiritual freedom, with the ‘Moloch’ of contemporary America as its oppressor, draws attention to political connotations. The need for spiritual and artistic freedom is paralleled in the poem by the stream of consciousness technique and improvisational jazz rhythm, held in place by the repeated ‘who’ in Part I,. With this fundamental creative, organic impulse at its core the idea that this poem indulges in luxury is inconsistent. 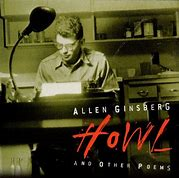 The contemporary Beat poet Anne Waldman describes the use of language in ‘Howl’ as similar to that of a ‘bodily fluid’[11], as it flows forth natural and unhindered, without censorship or self-consciousness. Perhaps it is here that the aesthetic forms of Ginsberg and Rich must be separated in approach. Rich’s carefully composed line structure in, for example, ‘Power’ (1974) and her use of gaps between the words,

suggest carefully chosen language and structure, which reveal a certain power operating in the employment of these words and the original arrangement of them that she herself has created. The importance of the words themselves, and by implication, the framework and apparatus that is provided by language as a whole, is directly alluded to in Rich’s poem ‘Diving into the Wreck’[13] (1972).

‘The words are purposes.

The words are maps.

I came to see the damage that was done

The crucial guiding power of words in the ‘real’ world, as opposed to the abstract, echoes Lorde’s use of building metaphors when discussing the regenerative power of poetry and its position as ‘the skeleton architecture of our lives.’

By rejecting traditional structure, Rich, like Ginsberg, is rejecting the constraints on her language and her own expression that she feels contemporary American culture is responsible for. Both poets, on the level of merely structural devices, demonstrate that for them poetry is certainly not a luxury, an attractive but redundant art form, as the political can be expressed as the personal clearly and powerfully through the medium of poetry. Where Ginsberg uses the free flowing style of stream of consciousness writing to demonstrate his freedom from the ‘self-consciousness and fear that actively inhibit vision’[14], Rich uses physical space and absence of punctuation (like Lorde) to ‘loosen the deliberate syntactic connections between the words’[15]; an action that represents a freedom from the linguistic tradition, which feminist historiographers would argue is a tool used by the oppressive, white ‘patriarchal power system’[16].

Using the figure of acclaimed female scientist Marie Curie as a model in the poem ‘Power’, Rich demonstrates how the conscious act of ‘denying’ (line 14) conceals the fact that ‘her wounds     came     from the same source as her power’ (line 17), an act that allowed Curie to die ‘a famous woman’ (line 14). But this denial is implicitly criticised in the poem. The form and structure of the words on the page cause the eyes of the reader to rest on the recurring, detached ‘denying’ (line 14 and line 16) and the final line physically separates the ‘wounds’ and the ‘same source as her power’, making it more difficult visually to connect the two, and therefore separating them as aspects of Curie’s experience. This adds enormous emphasis to Rich’s argument that poetry as a ‘regenerative process, could help you save your life.’ If Rich’s poetic language and form can be represented as her ‘power’, allowing her voice and interpretation of her own experiences to exist within the sphere of contemporary American literature, then her experiences of oppression, exclusion and misrepresentation in literature from the patriarchal power structures and ‘traditional’ American society would be interpreted as her wounds. The experiences she is able to mould into her highly sophisticated, yet readily accessible aesthetic form give her the words and images that connect these political statements to the personal; her ‘regenerative process’ transforms the pain and anger of her experiences into powerful poetry. Any luxury element to this aesthetic form is starkly absent. The same is true of Ginsberg’s less political but more spiritual ‘call to arms’; his experiences and imagination flow across the page with eloquence and urgency, the voice of the underdog howling a passionate response to conservative, mainstream America. These poetic voices speak from necessity, not comfortable, self-indulgent luxury.

[7] Ginsberg, A., Howl (1956) from Howl and Other Poems, reprinted in ‘The Heath Anthology of American Literature, general editor P. Lauter, Houghton Mifflin Co., 2002.

[8] Allen Ginsberg : Composed on the Tongue, taken from ‘The Beat Generation’, seminar handout